Find the Perfect Home for You in Ingersoll

Ingersoll, Ontario, is a small city in Oxford County. This town is the namesake of its founder Thomas Ingersoll. Ingersoll is home to approximately 13,000 citizens.

The motto in Ingersoll is “Prosperity Through Progress.” This community truly lives up to its motto because it started off as a tiny village and is now a vibrant town. It even had a “cheesy” history. From the mid-19th century to the early 20th century, the town played a huge role in the cheese-making industry. During the year 1866, a 7,300-pound cheese block known as the “Big Cheese” was created and showcased in different cities. To learn more about this community’s cheese history, you can visit the Ingersoll Cheese and Agricultural Museum. The town isn’t just known for cheese; it’s also known for its festivals like the Winter Lights Festival, Harvest Festival, and Ribfest. John Lawson Park and Trail is a nice place for spending time with nature. Its trail runs close to Thames River, plus you can bring your dog along if you wish. View various works of at the Ingersoll Creative Arts Centre. Additionally, you can sign up for many types of arts and crafts classes. Victoria Park is this town’s first park. (It was created in 1869.) The park is where you’ll find Victoria Park Community Recreation Centre. Ingersoll has five schools: four public schools and one Catholic school.

Ingersoll real estate properties are mainly comprised of single-family houses. These Ingersoll homes have two to three bedrooms and two to four bathrooms. They measure between 1,500 to 3,000 square feet. Some residences come with amenities like decks, fireplaces, attached garages, and hardwood flooring. Think about buying your first or next home in Ingersoll. It possesses an intriguing history, it has many parks and green spaces, and it exudes a charming, small-town vibe.

What are some commute times from Ingersoll to major cities?

If you have questions about any of the homes for sale in Ingersoll please feel more than welcome to contact me. 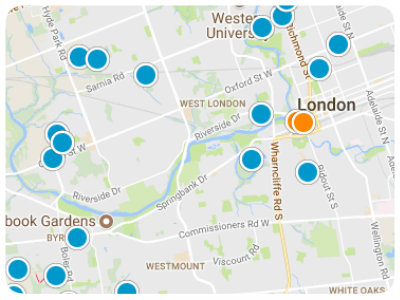